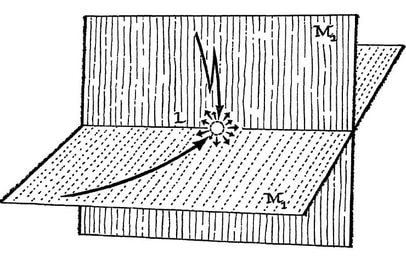 BIASOCIATION (Koestler)
The Bisociation of Matrices Koestler argues that the essence of creativity lies in: “the perceiving of a situation or idea . . . in two self-consistent but habitually incompatible frames of reference.” He coins the expression “bisociation” to characterize this act and uses the term “matrices of thought” to describe “any pattern of activity governed by a set of rules - its ‘code”’. Koestler suggests that originality, emphasis and economy are universal features of creative thought. Koestler considers that the process of emphasis can be subdivided into three components: selection of the relevant stimuli; simplification through the removal of non-essential elements; and exaggeration of the important elements. Koestler suggests that “one measure of originality is its surprise effect.” The exercise of economy is the opposite of emphasis and involves the use of implication. According to Koestler “the principal mark of genius is not perfection but originality” (pp. 402). He argues that, while the emotional context changes, the psychological processes supported the generation of original results is ultimately the same in humor, science and art and involves the bisociation of previously unrelated matrices of thought. 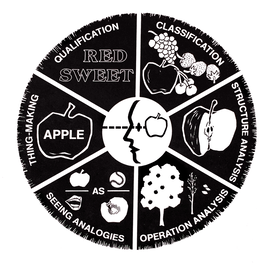 CREATIVE ANALYSIS (Upton)
The Creative Analysis model was developed by Dr. Albert W. Upton (1897–1986) during his 30-year tenure at Whittier College. Creative Analysis, originally called Graded Exercises in Analysis,  was originally used with Upton's students to help them develop better analytical skills and become more aware of thir thinking processes. The model was refined in the late 1950's with the help of Upton's former student Richard W. Samson. Samson further developed the model by incorporating images and simplifying the language to make it more accessible to the layperson and other teachers.  Using his methods, one of his freshmen classes, over a seven month period, improved their IQ scores by an average of 9.6 points.The method had notable success in the 1970s and 1980's. The model's strength is that it 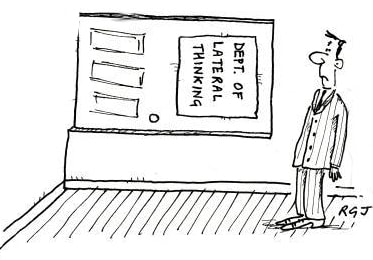 LATERAL THINKING (deBono)
Lateral thinking is the step by step approach to creativity, says Dr. Edward de Bono. Lateral thinking is the process of using information to bring about creativity and insight restructuring. Lateral thinking can be learned, practiced and used. It is possible to acquire skill in it just as it is possible to acquire skill in mathematics. So what is Lateral Thinking? De Bono says: With logic you start out with certain ingredients just as in playing chess you start out with given pieces. But what are those pieces? In most real life situations the pieces are not given, we just assume they are there. We assume certain perceptions, certain concepts and certain boundaries. Lateral thinking is concerned not with playing with the existing pieces but with seeking to change those very pieces. Lateral thinking is concerned with the perception part of thinking. This is where we organize the external world into the pieces we can then 'process'. Lateral Thinking is a set of processes that provides a deliberate, systematic way of thinking creatively that results in innovative thinking in a repeatable manner. While critical thinking is primarily concerned with judging the true value of statements and seeking errors. Lateral thinking is more concerned with the "movement value" of statements and ideas. A person uses lateral thinking to move from one known idea to creating new ideas. I define four main categories of lateral thinking tools: Often trying to think harder in the same direction may not be as useful as changing direction. Effort in the same direction will not necessarily help you achieve your goal. Lateral thinking deliberately distances itself from "vertical" or logical thinking (the classic method for problem solving: working out the solution step-by-step from the given data) or "horizontal" imagination (having many ideas but being unconcerned with the detailed implementation of them by deferring judgement). A healthy human brain does not want to always be creative, it is designed to figure out how to do things or how to think about things and then 'locks' that automatic response or behavior into a subconscious process so that your conscious brain can focus on other matters. The techniques for Lateral Thinking fall under three broad categories: (1) Challenge–Situation in which the challenge does not accepts status quo; (2) Alternatives–Circumstances and situations often restrict the choice of alternatives and, therefore, it is better to assume a dynamic state of affairs, and; (3) Provocation–Forward or proactive use of statements, which implies that we make a statement first and see where it takes us. 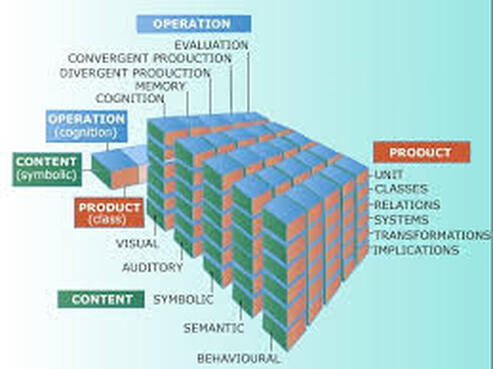 STRUCTURE OF INTELLECT (Guilford)
The structure of intellect (SOI) was envisioned and developed through research conducted by J. Paul Guilford (1897–1987). Guilford's theoretical model is based on the understanding that people have multiple types of intellect which can be theoretically seen in a three dimensional structure. Intelligence is comprised of products, contents, and operations. Guilford's work was in direct opposition to Charles Spearman's view of general intelligence (g-factor) which believed that intelligence could be characterized by a single number as measured with IQ tests. Guilford theorized that intellect could be developed with focused effort; his research supported this understanding. The SOI was the basis of Mary N. Meeker's work developing curriculum to improve 26 facets of intellect necessary for learning and education. 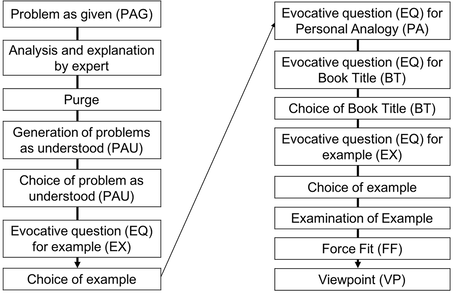 SYNECTICS (Gordon and Prince)
Around the same time in 1940s that Alex Osborn was developing brainstorming, Gordon was investigating the psychology of problem solving. He was later joined by George Prince and Arthur D. Little where they developed Synectics. Synectics is an approach to problem-solving that focuses on cultivating creative thinking, often among small groups of individuals with diverse experience and skills. Often used by skunkworks and other cross-functional teams, the approach can help group members explore problems; retain new, often abstract, information; and develop creative solutions by breaking from existing mindsets. The term "synectics" is derived from the Greek word "synectikos," which means to bring different things into unified connection. Synectics was co-developed in the 1950s by George M. Prince and William J.J. Gordon, while they were working in the Arthur D. Little Invention Design Unit, a consulting practice for helping companies develop new-product concepts. Prince and Gordon wondered why some meetings were more productive than others and believed that it had less to do with the participants than with some unknown dynamics. To understand the dynamics, they taped thousands of hours of product development meetings and turned their observations into methods that mirrored the techniques of successful entrepreneurs and inventors.
Gordon established three maxims of synectics theory: when people become aware of the psychological processes that affect their behavior, creative output increases; the emotional part of creative behavior overshadows the intellectual component; and the emotional and irrational components should be understood and employed as tools to boost creative output. Like design thinking, synectics draws on both right brain (the dreamer) and left brain (the reasoner) strengths and requires team members to be comfortable living with complexity and apparent contradiction. The approach involves mentally taking things apart and reassembling them to gain new insight and seeking to discover the links that connect seemingly unrelated elements through analogy and metaphor; this helps make something that is strange familiar and vice versa. 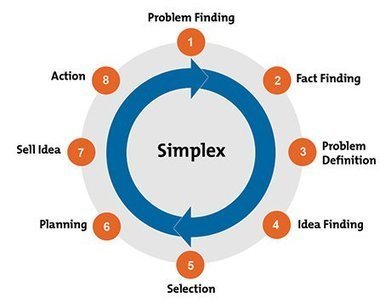 SIMPLEX (Basadur)
The Simplex process (formally known as The Simplex Creative Problem Solving process) was developed by Dr. Min Basadur in 1981. Simplex is designed to focus on defining a problem prior to developing the solution as a means of changing the perception of the problem. By redefining a problem from a stakeholder perspective, Basadur felt the parties would be more likely to create an optimal solution. There are four stages in the process: Generating, Conceptualizing, Optimizing, and Implementing, and follows an eight-stage cycle. Upon completion of the eight stages the cycle begins again to find and solve another or the next problem. This helps to ensure continuous improvement. Stages in the Simplex process are: Problem Finding, Fact finding, Problem Definition, Idea Finding, Selection and Evaluation, Planning, Selling of the Idea, and Action.  is a holistic creative problem-solving process. 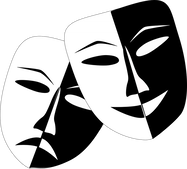 SOCIODRAMA (Torrance)
“Sociodrama is a creative problem-solving procedure which uses dramatic techniques to produce and test alternate solutions in group or social conflict.  In futuristic sociodrama, there can be multiple solutions which are proposed, tested and evaluated. The steps in the problem-solving process in sociodrama are quite like those formulated by Osborn (1962) and Parnes (1967) for creative problem-solving”. (Torrance, E.P., 1975). The eight steps of sociodrama are (1) Defining the Problem; (2) Establishing Situation; (3) Casting Characters; (4) Warming up; (5) Acting out; (6) Cutting the Action; (7) Discussion, and; (8) Future Planning. 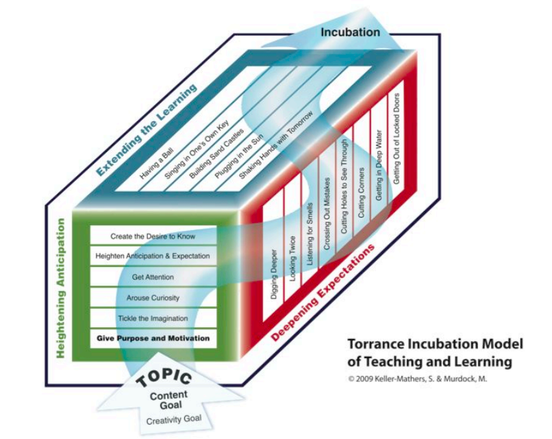 Torrance Incubation Model (TIM) (Torrance)
The Torrance Incubation Model is a three stage framework that supports teaching creativity, teaching creatively, and harnesses the power of incubation. The Torrance Incubation Model, or TIM for short, was developed by E. Paul Torrance as a design model that allows the delivery of both a primary content as well as a secondary content of creativity at the same time. The strength of TIM lies in its simplicity of weaving a creativity concept into a learning episode which allows creativity to be taught at the same tie as teaching different content. The TIM model has a three stage framework which: (1) Heightens anticipation; (2) Deepens expectations, and; (3) Extends the learning. The three stage framework of TIM prepares the learner to get curious, engage deeply and want to know more so that the likelihood of incubated thoughts increase after the learning. The basic TIM design stages are: 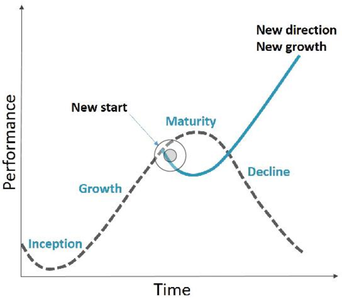 TRANSFORMATIONAL THEORY (Land)
​George Land (1933) formulated his Transformation Theory in the late 1960s. In 1973 Land published a hallmark and somewhat controversial book, Grow or Die: the Unifying Principle of Transformation, in which Land postulates a paradigm shift: that the biological forces universally held in nature which propel an organism to grow and evolve, are inherently driving humans to do the same, individually and collectively, marked by three distinct phases later renamed: (1) Forming, (2) Norming, and (3) Integrating. Land also produced the Creativity Index, proposing the concept that “measured” human creativity decreases as we age to a mere two percent by the time we are adults. An individual grows and develops as part of a “pull” toward its “internal picture” of the possible future. This vision is inscribed by DNA and interacting through mutualism and transformation, every part of the system could potentially pull together symbiotically toward a common future. Land has often been regarded as one of several classical “social architect” theorists, whose work includes examination of natural order, periodicity and patterns inherent in natural systems and the implications of living systems for human growth, fulfillment and organizational and societal evolution. 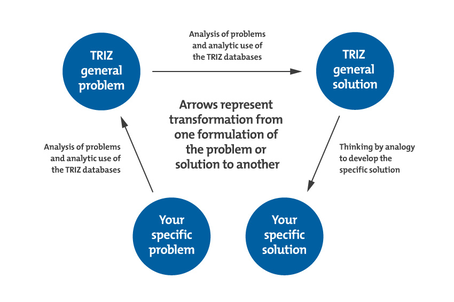 TRIZ (Altshuller)
TRIZ was developed by Genrich S. Altshuller (1926–1998) and is best known for its effectiveness in helping to resolve technical conflicts (contradictions). TRIZ is said to be a Russian acronym of theory of inventive problem solving. Typical examples are: Speed vs. Stability; Stress vs. Reliability, and; Complexity vs. Repair Ease. Contradictions are typically resolved by: Moving toward a more ideal state; Separating factors, and; Tapping into underutilized system resources and elements. The Contradiction Matrix presents research-based suggestions for areas to investigate.